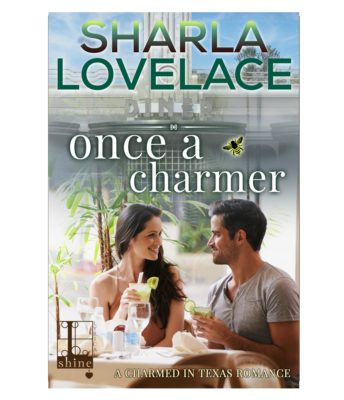 Once A Charmer (Charmed in Texas #3)
Where to Purchase

“We’re messy. We’re raw and rough and passionate, and we say the wrong things and stumble over each other, but there is no one I’d rather stumble through the rest of my life with than you. I don’t want ordinary. I want mind-blowing.”

By day, Allie Greene stays busy with her family diner, and keeping tabs on her teenage daughter. What’s really exhausting Allie, however, are the nights. Not that she minds Bash Anderson unbuttoning her naughty desires—if only in her dreams. But what was he doing there at all? He’s her best friend, and a father figure to her girl. Talk about awkward. Talk about OMG-heat-and-fireworks that are flipping fifteen years of normal upside down. And now, when Allie needs him as a friend more than ever, logic doesn’t stand a chance against his lips and irresistible deep-blue eyes . . .

Sure, Bash has fantasized about Allie, but there’s no way he’d act on it. She and her daughter are the closest thing to family he’s ever known. With the exception of one drunken moment fifteen years ago, he and Allie have stayed on this side of the line—until that impulsive kiss of hers knocked him on his butt. That’s just one hurdle. Not only does Allie need Bash’s help to save her diner, but his apiary is in trouble, too. To stir the pot further, they’ve been roped into vying for the town’s Honey King and Queen contest—a sweet event that’s making them closer than ever. Something’s bound to come undone. Bash just hopes it’s not the friendship he’s worked so hard to hold on to.