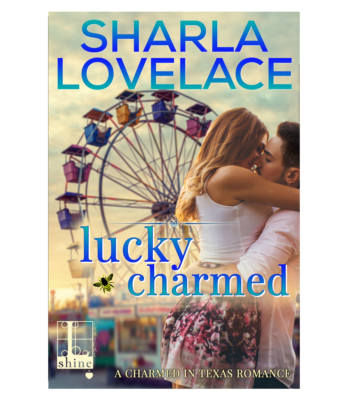 Lucky Charmed (Charmed in Texas #2)
Where to Purchase:

Falling in love with him was easy, like we were made to order. Our bodies fit, our sentences finished each other, the feel of him close by was tangible whether we were touching or not. He called me his love, and we belonged to each other. Incomparable lovers. Best friends. Inseparable. Long after the carnival left Charmed and the miles became too far, and a decision had to be made.

I made mine.  He made his.  They weren’t the same.

Charmed, Texas, is as warm and welcoming as it sounds. But even in a small town, when it comes to love, sometimes you’ve got to take the bitter with the sweet . . .

Carmen Frost hates honey. And bees. And in her hometown of Charmed, Texas, which practically invented the stuff, that’s a problem. The good news is that the summer Honey Festival is finally over. Even better, so is the annual Lucky Hart carnival, a road show that made off with her dreams years ago—including the boy she loved. Now she’s got a divorce behind her, and a successful law career in front of her, but in a tiny town, big memories die hard. Or they don’t die at all—as Carmen discovers when she runs into an all too familiar pair of eyes—older, wiser, and just as heart-melting as ever . . .

Sully Hart has had enough of the nomad lifestyle. Travelling with his father’s carnival gave him adventures, but it cost him much more. Now he’s home to stay, contracted to create an entertainment complex in Charmed. He wants roots, a house with a yard and all the mundane pleasures that go with it. But the girl he loved has become a woman who still wants freedom. Can she still want him? It seems he and Carmen are at each other’s throats one minute—and on each other’s lips the next. Someone’s gotta give . . .